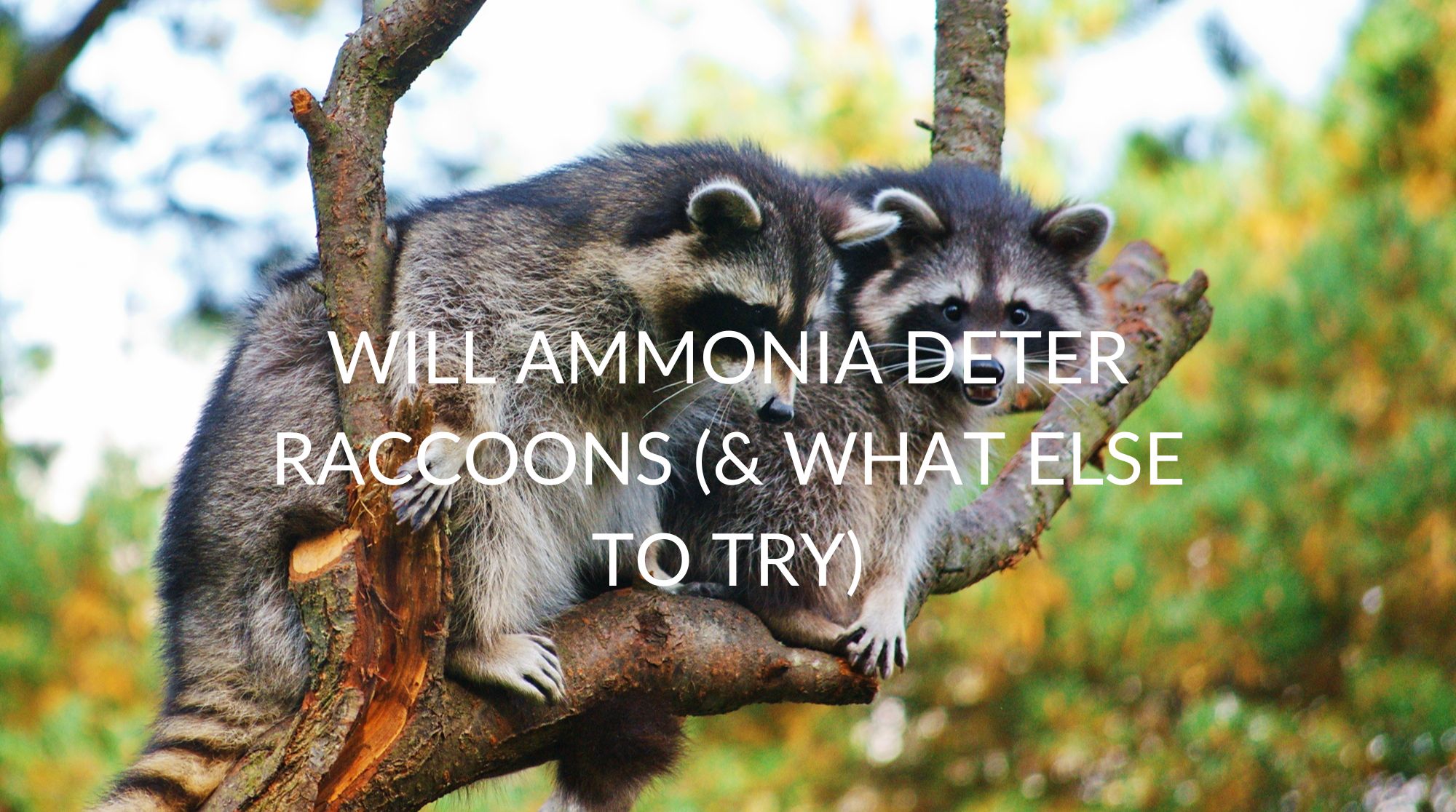 You may have heard before that if you can get rid of raccoons with ammonia. Well, unfortunately, this isn’t entirely true. In this article, not only will you find out just how effective ammonia is at repelling raccoons, what other smells raccoons hate, and how to deter them for good!

So, Can You Get Rid Of Raccoons With Ammonia?

Unfortunately, if you want to get rid of raccoons, then ammonia isn’t going to be the most effective method. According to Terminix, even though ammonia has a strong odor, it’s not going to deter raccoons.

However, the good news is that ammonia may work temporarily to deter raccoons. However, once they start to become accustomed to the smell, they’ll soon go about their business without it bothering them.

You may also notice that they’ll only inhabit areas far away from the ammonia, or if you’ve left the ammonia on a rag, they may simply move it altogether.

Where Did The Idea Come From?

If you’ve been led to believe that ammonia will get rid of raccoons, then you may be wondering where the idea came from in the first place.

Well, it’s known that raccoons will often avoid an area that another male raccoon or potential predators have urinated in. And because ammonia smells similar to urine, it was thought that it would trigger the same instinct in raccoons as predator urine.

So How Do You Get Rid Of Raccoons?

If ammonia doesn’t work, then you’re obviously wondering what EFFECTIVE methods you can try to get rid of raccoons.

Well, trying any of these things can be effective at removing raccoons:

The first thing to do is make sure that your trash is sealed tight. Raccoons love to dig through garbage looking for food. So ensuring that they can’t get into your trash is going to make your home a lot less appealing to them.

Block Off Any Entry To Your Home

You should also make sure that you’re blocking off any entry to your home as well. You’d be surprised at how they’re getting in. As well as making sure you’re fixing any obvious ways in, you’ll also need to think about less obvious entrances, such as your chimney or cat flap.

You should also make sure that you’re removing pet food when your pets are done eating. Leaving pet food out all day will unfortunately attract raccoons to your home as well.

You should also make sure that you’re trimming your garden and keeping it clean as well. Trimming your garden is going to remove a lot of the hiding places that raccoons may often use. As well as this, you should make sure no tree branches or bushes are directly touching your home, as this could be allowing the raccoons to enter.

Sometimes, the best thing you can do is call a professional to come and get rid of the raccoons for you. They’ll be able to better identify where the raccoons are coming from, and if you pick the right one, humane ways to move them on as well!

What Other Smells Do Raccoons Hate?

Here are some other smells that raccoons also dislike and which are worth trying as a temporary solution.

Raccoons hate the mixture that is made when you mix onion and pepper with some water! They will stay away from the places where it has been sprayed because the smell from this combination will temporarily disorient all of their nasal receptors.

Another effective repellent is Epsom salt, which is ideal for keeping raccoons out of your garden. Epsom salt is a fantastic fertilizer for your garden in addition to being a raccoon repellent, hence why it’s a great choice!

Garlic may not be your favorite odor, but raccoons are going to detest it even more! Use garlic juice for the greatest outcomes because the fragrance from the juice is even stronger.

There is some good news when it comes to scents that will deter raccoons. You can also use peppermint essential oil to deter raccoons if you don’t want your house to smell bad because while it will make your house smell great, raccoons are going to absolutely hate it!

Last but not least, hot pepper is one of the stronger aromas that raccoons abhor the most, so it’s worthwhile to try this too. Hot pepper will directly damage a raccoon’s nasal receptors, causing disorientation and making it challenging for them to find the meal they genuinely desire!

Here are some frequently asked questions people have about raccoons!

Will Bleach Keep Raccoons Away?

Just like ammonia, bleach is only going to keep raccoons away for a few hours until they become used to the smell and return.

Will Pine Sol Keep Raccoons Away?

Again, you can use pine sol to keep raccoons away for a period of time, but if what’s causing them to come isn’t fixed, then they’re likely to return.

There is no evidence to suggest that Irish spring soap will deter raccoons; however, it is known to deter other pests such as deer. But the chances are even Irish spring soap is going to be a temporary solution.

As you can see, while ammonia and ammonia balls can provide a temporary solution for repelling raccoons, they’re not going to last long, and instead, you’ll need to take more concrete steps to get rid of them permanently!

If you liked this article, make sure you check out the rest of the website; otherwise, have a great day!