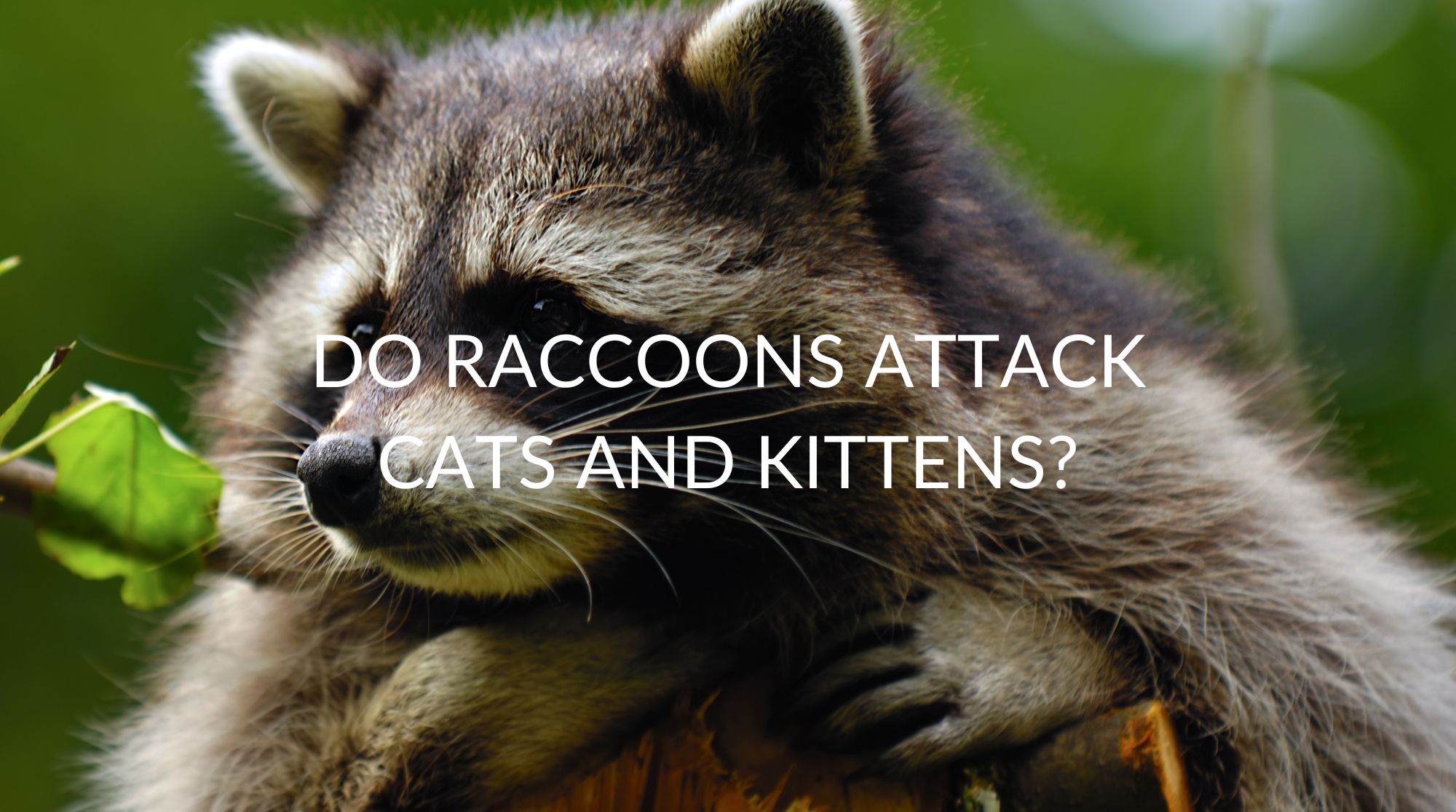 Are you worried about raccoons attacking your cat or kitten? If so, you’ll find out how likely it is that an attack will happen, whether raccoons are capable of killing, and most importantly, how to prevent it from happening!

Do Raccoons Attack Cats And Kittens?

Yes, it’s entirely possible for raccoons to attack a cat or kitten if they come into contact with each other. While they often try to steer clear of each other, unfortunately, it’s not unheard of for attacks to happen.

Can Raccoons Kill A Cat?

Raccoons are extremely aggressive when they’re fighting, and it’s more than possible that a raccoon could kill a cat. Fortunately, though, cats are a lot faster than raccoons, so there’s also a strong chance that a cat would simply be able to escape.

Unfortunately, it’s a lot more likely that a raccoon could kill a kitten. Like any baby, kittens don’t have any special defense, so if a raccoon decides to attack them, they’ll probably end up being killed.

Why Do Raccoons Attack Cats And Kittens?

There are a few different reasons that raccoons may end up attacking a cat or kitten, but fortunately, they can be planned for and avoided in a lot of cases.

One reason that a raccoon may attack is due to territorial aggression. If the cat or kitten stumbles onto a raccoon’s den or territory, then it may try to defend its space by attacking. This is more because they feel backed into a corner than pure aggression.

A Mother With Kits

Mothers with kits are also a lot more likely to attack as well. Mother raccoons are extremely fierce when they’re defending their kits, so if they think a threat is coming, they won’t hesitate to attack.

They’re Too Familiar With Human And Pets

If a raccoon has become too familiar with humans and pets. This happens a lot more in urban settings. If raccoons have had a lot of exposure to people and pets, they may feel a lot bolder. However, this boldness can result in conflicts later down the line.

Sometimes cats and raccoons may spot the same piece of food and end up competing for it as well. When this happens, physical aggression can ensue, and the raccoon may end up attacking your cat.

The Raccoon Is Sick

And lastly, the raccoon may be sick. If a raccoon is rabid or suffering from other diseases, it’s much more likely they’ll act aggressively.

While it’s not common, it’s definitely possible for a raccoon to eat a cat if they do enough damage to them. It’s more likely that a sick, old, or injured cat will get eaten by a raccoon. However, even unlucky cats could end up being their meal.

It’s much more likely that a raccoon will end up eating a kitten than a cat. Unfortunately, kittens are defenseless, and if a raccoon gets to one and it’s hungry enough, it won’t hesitate to eat one.

How To Prevent A Raccoon From Attacking Your Cat

Fortunately, there are a few simple things you can do to prevent raccoons from attacking your cat. Here are the best practices to follow:

Keep Them Indoors At Night

There are a lot of nocturnal predators at night asides from raccoons, so keeping your cat indoors during the night is one of the best ways to make sure you’re keeping them safe.

At home, make sure your trash is well-sealed. Raccoons enjoy searching through the trash for meals. Making sure they can’t get your trash will therefore make your home far less enticing to them.

Fix Any Holes In Your Home

If there are homes that lead into your home, you should make sure you’re fixing these too. Raccoons are very determined, and if they want to get into your house through a hole, they’ll find a way.

Shine Bright Lights At The Raccoon

If you spot raccoons in your backyard or home, when you notice them, shine a bright light on them. This is going to scare them away instantly, and if you do it enough times, they’ll begin to feel like that area is unsafe.

Make Sure Trees And Hedges Are Trimmed

You should also make sure that trees and hedges around your house are trimmed as well. This is especially true when any of these things are touching your house. A lot of the time, trees can give raccoons access to your roof or other areas of the home they can enter.

Things that make noise can be used to scare raccoons away as well. Wind chimes could make a raccoon jump when the wind blows, or leaving a radio on can make it seem to the raccoon that there are people in the vicinity.

Motion-activated sprinklers and lights can also scare raccoons, so the next time they enter your property, they might be enough to scare them away!

If you don’t have a fence, then you should first of all install one to make it harder for raccoons to enter your premises. However, if you already have a fence, make sure that it also goes deep underground as well.

Not only are raccoons good at climbing, but they’re also good at digging, so you need to make sure you’re cutting off both ways in.

And lastly, predator urine can be an effective way to get rid of raccoons as well. Bobcats, cougars, and even domestic dogs are all predators to raccoons, so purchasing some predator urine is a great way to deter them!

Here are some frequently asked questions that people have about cats and raccoons!

Do Cats Stay Away From Raccoons

Most cats will realize that raccoons are a danger to them, and they’ll make sure to steer clear of them as best they can. And fortunately, if a cat doesn’t bother a raccoon, then it’s unlikely an attack will happen.

Raccoons will definitely eat cat food if they can. In fact, raccoons aren’t picky, and they’ll generally eat anything that’s edible without worrying.

As you can see, not only can raccoons attack cats, but in some cases, they will also kill and eat them. Fortunately, though, cats tend to stay away from raccoons most of the time, and there are a number of things you can do to prevent an attack occurring!