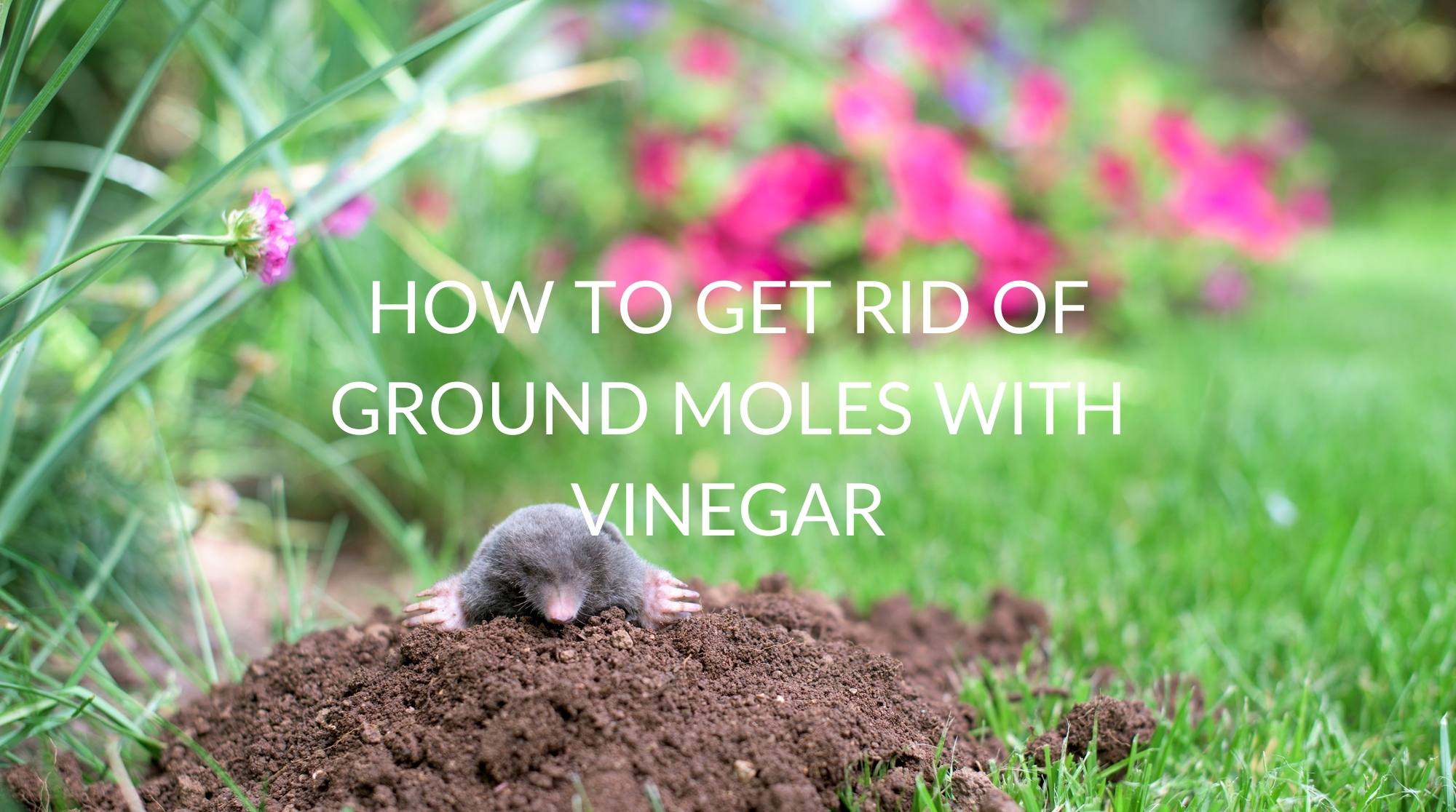 If you’ve noticed ground moles in your yard, you may have heard that one of the best ways to get rid of them is with vinegar. In this article, not only will you learn how to remove moles with vinegar, but also why it’s so effective and other prevention methods you can try!

First Of All, Will Vinegar Get Rid Of Moles?

Yes, vinegar can be an effective method for removing moles from your garden. You just need to make sure you’re diluting it before using it, as it can actually burn moles and harm other helpful animals in your garden as well!

Why Should You Use Vinegar?

There are a number of reasons that you should opt to use vinegar over other pest control methods.

One reason that you should use vinegar is that it’s humane to moles. Even when watered down, the smell is going to be unbearable to moles, and it will make them want to flee your garden!

It Will Repel Other Animals

And it’s not just moles that vinegar repels. Deer, groundhogs, rabbits, mice, snakes, and raccoons all hate the smell of vinegar as well.

As well as repelling other animals, it’s also going to be safe. This is especially important if you have children or pets. While vinegar may not smell great, unlike pesticides, once you’ve used it in your garden, there’s no chance of it harming your children and pets.

Another reason that vinegar is so great is because of how cheap and readily available it is. In fact, the chances are you probably already have enough vinegar in your home to repel moles!

A lot of people want to remove moles from their yard because of the damage they cause to their lawn and flowers. However, oftentimes using harsh chemicals can end up causing more damage!

Fortunately, you won’t have this problem with vinegar. It’s going to have no negative effects on your yard.

It Will Deter New Moles

Not only will vinegar get rid of any moles currently in your yard, but it will also deter new moles from entering. The moment they sniff out the vinegar in your yard, they’re going to go in the opposite direction, thanks to how much they hate how it smells.

It Leaves A Film In Their Tunnels

When you pour vinegar into a moles tunnel, it’s going to leave a film over it, which means the moles won’t want to dig anymore. Instead, they’ll want to leave your yard and go somewhere else.

Now that you know why vinegar is so effective at removing moles from your yard, here’s a step-by-step guide on what you’ll need to do!

Make Sure You’re Dealing With Moles

The first thing you’ll want to do is make sure that it’s the moles you’re dealing with. After all, if you use vinegar for another pest or problem, then you may just end up wasting your time. Some tell-tale signs that you’re dealing with moles include:

Now that you know you’re dealing with moles, the next solution is to use vinegar to get rid of them. Fortunately, to do so is incredibly simple.

Mix one part vinegar with three parts water and add it to a spray bottle. Once you’ve done this, spray the affected areas with the solution every few days. On top of this, you can also pour some of the solutions down the holes as well to make them uninhabitable to the moles, who will absolutely hate the smell!

It’s important to make sure that you’re reapplying vinegar every few days to ensure you get rid of the moles for good. If you don’t, it’s only a matter of time before the scent wears off.

Other Ways To Deter Moles From Entering Your Garden

Now you know how to use vinegar to repel moles from your garden, you should know it’s not the only method! In fact, there are plenty of other methods you can try as well! When used in combination, you’re going to have a tight-knit way of getting rid of moles!

So try using vinegar in combination with:

Marigold, daffodils, and any other alliums release a smell that moles hate. By planting them in your garden, you’re going to repel moles for good! Not only this, but they’re going to brighten up your garden a lot as well!

Get Rid Of Grubs

And lastly, if you don’t mind the risks, you can also get rid of grubs with insecticides; just make sure you’re using it in early spring for the best results.

If there are specific areas you don’t want moles to enter, you can dig a trench and fill it with rocks and gravel. This is going to drastically reduce the chances of the moles entering. Just make sure the trench in question is at least 3 feet deep.

Ultrasonic repellents work particularly well with moles because they absolutely hate the sound disturbance. When you’re choosing an ultrasonic repellent, make sure you’re picking one that is specifically for moles and gophers, as they will be the most effective.

Another effective way to get rid of grubs is with diatomaceous earth. Diatomaceous earth is razor-sharp ground-up fossilized algae. By sprinkling about 1/2 a cup of diatomaceous earth over every square foot of soil and mixing it in about 6 inches, you’re going to kill all the grubs, which in turn will make the soil unappealing to moles.

You can also use repellent granules made specifically for moles and gophers as well. Oftentimes, these granules will release castor oil into the soil, which, while completely non-toxic to moles and everything else, will still deter them.

Dry Out Your Garden

Sometimes it can be as simple as letting your garden dry out a bit. Doing so will help keep the grub and earthworm population down, once again, making the soil a lot less appealing to moles.

Try Catching Them Yourself

There are plenty of catch and release traps you can use to get rid of moles, and a quick YouTube search will show you exactly how to use them! Then once you’ve caught the moles, all you need to do is move them to another location and release them. Just make sure you check local laws to find out where you’re allowed to do this.

Finally, you can also try mixing castor oil and dish soap to help repel moles as well. To do this, mix three parts castor oil with one part dish soap. Then once you’ve done this, mix 4 tablespoons of your solution with 1 gallon of water. And finally, apply it over your yard every couple of days!

As you can see, vinegar is extremely effective for getting rid of moles from your yard; however, it’s not the only method. If you use multiple methods listed below, you’ll be able to get rid of moles in no time, in a humane and effective way!