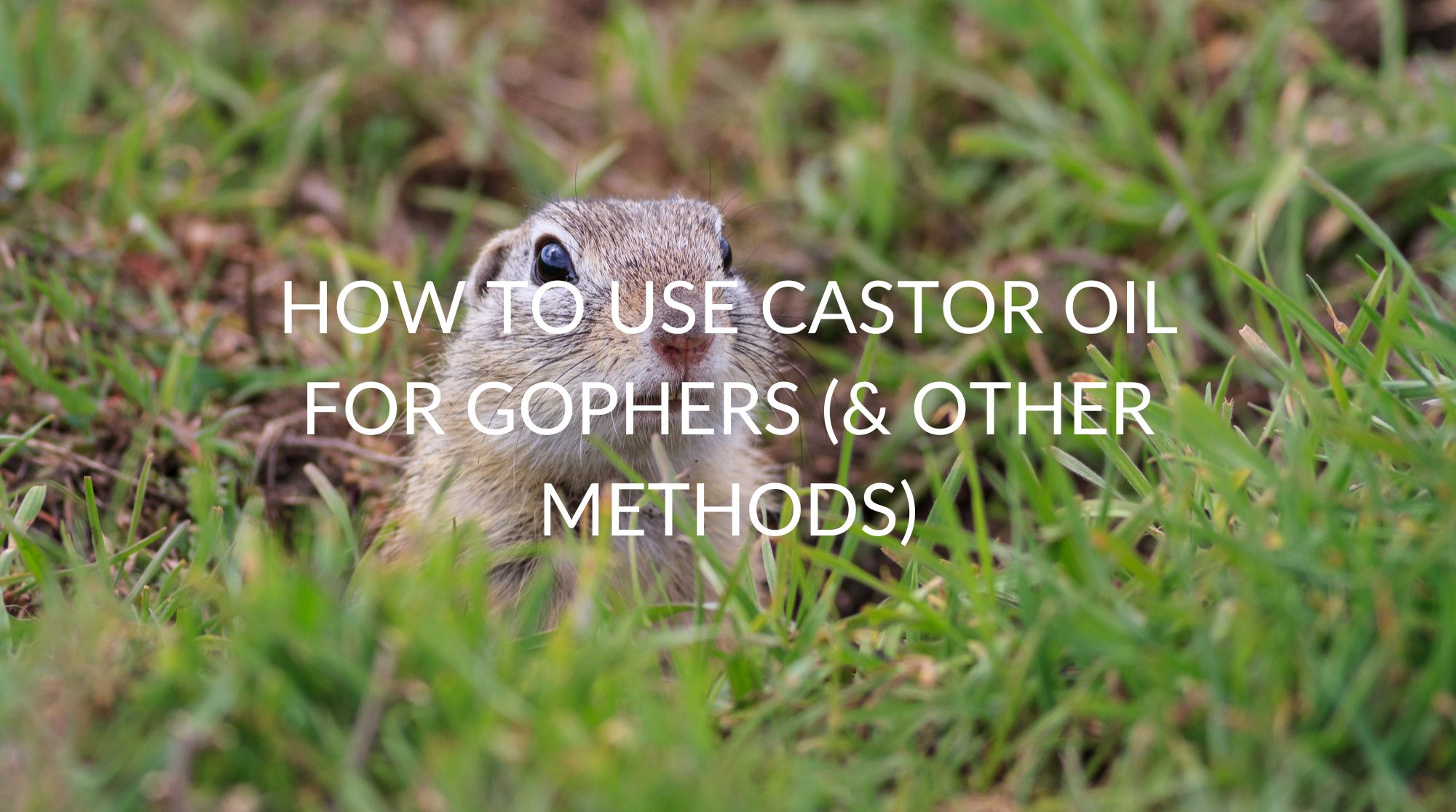 Are you wondering what the most effective way to use castor oil for gophers is? Well, in this article, not only will you find that out, but you’ll also learn why castor oil is a great choice for getting rid of gophers and other effective prevention methods you can use as well!

So Why Is Castor Oil Great For Getting Rid Of Gophers?

Here are all the reasons castor oil for gophers is so effective and why you should consider using it to get rid of them for good!

Of course, one of the main benefits of castor oil is that it’s humane. It’s not going to harm gophers, but it is going to make your property incredibly unpleasant to them, forcing them to leave!

It Will Also Repel Other Animals

Not only is castor oil going to repel gophers, but it will repel other pests as well, including voles, moles, chipmunks, squirrels, mice, and much more!

Castor oil is also safe for the environment and animals as well. This is perfect if you have children or pets because you won’t have to worry about them getting sick as you do with other methods.

On top of everything else, castor oil is also cheap and readily available. In fact, you can even pick some up off Amazon relatively cheaply!

A lot of people want to remove gophers from their yard as fast as possible because of the damage they cause to their lawn and flowers. However, oftentimes using harsh chemicals can end up causing more damage!

Fortunately, castor oil is just extracted from castor seeds which means not only is it biodegradable, but it’s also sustainable as well!

It Will Deter Other Gophers Too

In addition to getting rid of any gophers that are already in your yard, castor oil will also discourage any further gophers from coming in. Because they detest the scent of castor oil so much, as soon as they catch a whiff of it in your yard, they’ll turn away.

How To Know If You’re Dealing With Gophers?

Before you start getting rid of gophers, it’s important to make sure that it’s actually gophers you’re dealing with. Here are a few tell-tale signs that it’s gophers and not something else!

Mounds Are Appearing In Your Yard

One of the most common signs you’re dealing with a gopher is that mounds begin to appear in your yard. And unlike moles, where the tunnels tend to stay close to the surface, the tunnel of a gopher will go deep underground.

Your Plants Are Damaged

Of course, another tell-tale sign that gophers are in your yard is that your plants are damaged. They’re herbivores, so they’re only going to be eating plants. Oftentimes, they’ll eat the roots of the plant, so you may notice the plant wilting without any sign of damage.

Other times, they may pull plants out of the ground and drag them down into their holes.

Cables May Be Destroyed

If you have any cables going to your sprinkles etc., then these may end up getting chewed to pieces by gophers as well. Gophers need to keep chewing to keep their teeth short. And wires are perfect for this.

How To Use Castor Oil To Get Rid Of Gophers

Now you know why castor oil is so good for getting rid of gophers, you may be wondering how to use it effectively. So here’s a step-by-step guide on what you need to do!

Because castor oil causes gophers to have diarrhea, they absolutely hate the smell. They’ll soon leave their burrow in search of somewhere that won’t smell as bad.

Other Effective Methods To Get Rid Of Gophers

However, using castor oil to get rid of gophers isn’t the only method you can try. In fact, using castor oil in combination with any of the other methods listed below is going to increase the chances further that you’ll remove gophers from your home for good!

One of the best ways you can get rid of gophers is with live trapping. Not only is it more humane than poisoning gophers, but you’ll also negate the risk of poisoning any children, pets, or other animals as well.

To use traps, just bait them with food gophers love, such as carrots, alfalfa, apples, lettuce, and peanut butter. Once you’ve baited your traps, just place them in the main tunnels, and if within 48 hours the trap hasn’t caught anything, move it to a new location.

Once you’ve caught a gopher, you just need to take it half a mile or more away from your property and let it loose.

As well as using live trapping and castor oil, adding exclusion fencing to your yard is a great way to keep gophers out. This is perfect if you’re trying to protect your vegetables from gophers, as they’ll be unable to get to them with this method!

If you want to try exclusion fencing, simply dig a trench and line it with the fencing before filling it back in. For best results, use a wire mesh with openings of 1/2 x 1 or smaller.

Ultrasonic repellents work particularly well with moles because they absolutely hate the sound disturbance. When you’re choosing an ultrasonic repellent, make sure you’re picking one that is specifically for moles and gophers, as they will be the most effective.

You can also use repellent granules made specifically for moles and gophers as well. Oftentimes, these granules will release castor oil into the soil, which, while completely non-toxic to moles and everything else, will still deter them.

Barn owls are a gopher’s natural predator, so one way to get rid of them is by letting nature take its course. By constructing barn owl nesting boxes, you can introduce barn owls to your yard, which over time, will decrease the gopher population in your area.

What Should You Avoid Doing?

As well as all the things listed above, there are also some things you definitely want to avoid doing as well.

It may seem like the easiest solution is to just kill them, but did you know that gophers are actually beneficial to your garden and the ecosystem as a whole? Not only are they going to increase the rate plants decompose, but they also help aerate the soil, meaning your plants will grow a lot better.

Avoid Flooding Them Out

Other people say that it’s a good idea to simply flood a gopher’s burrow; however, this isn’t recommended either. When you flood a gophers burrow, not only will you not get rid of the gophers, but you’ll just end up damaging your garden.

Aside from flooding, you should also avoid fumigating gophers as well. Fumigation can be incredibly dangerous, especially if you plan on blowing up the holes underground. And even if you do fumigate a tunnel, gophers can simply move dirt in the way to seal off parts of their tunnel, keeping them safe.

As you can see, using castor oil is a great way to get rid of gophers from your yard. However, when it’s used in combination with another deterrent, it’s going to be even more effective! So give the methods above a try and watch how quickly the results roll in!

And lastly, if you liked this article, make sure you check out the rest of the website! Otherwise, have a great day!