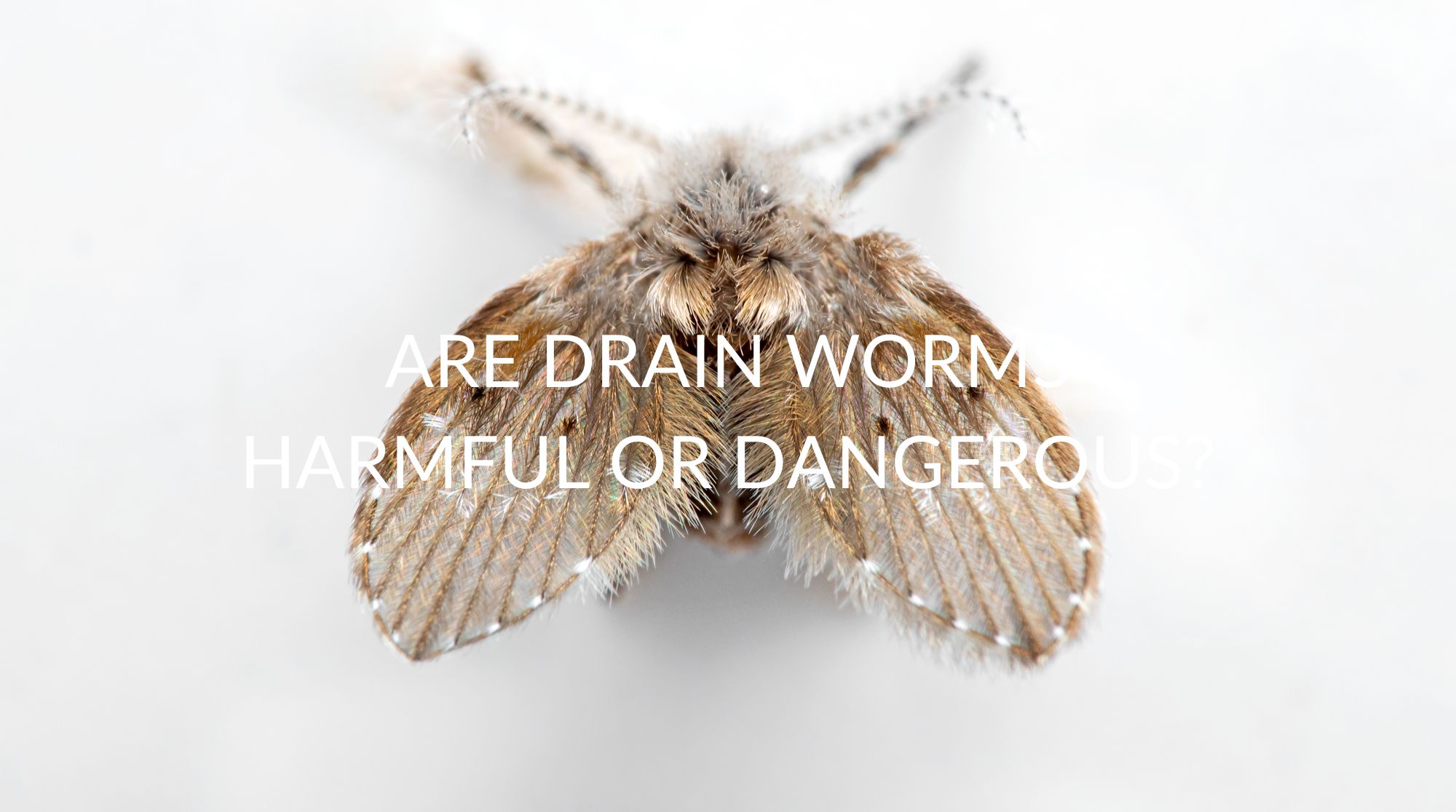 While drain worms are gross, fortunately, they’re not harmful to humans. So if you do spot them, you don’t need to be alarmed. However, the only risk that comes from drain worms and drain flies is that they could transfer bacteria from one area of your home to another.

Can Drain Worms Make You Sick?

While drain worms themselves can’t make you sick themselves, it’s possible that they could transfer bacteria from one area of your home to another that could end up making you sick. As well as this, there have been reports that drain flies and drain worms can aggravate symptoms of bronchial asthma in people as well.

How To Prevent Drain Worms In The First Place?

Now you know how to get rid of drain worms in your shower; you also want to make sure they’re not coming back either.

Here are all the ways to ensure that your shower stays drain worm free from now on!

One of the easiest ways to prevent drain worms from coming back in the future is to clean your bathroom regularly. This includes purging your drains and making sure that there’s no standing water anywhere.

As well as this, you should also disinfect any areas you think it’s likely drain worms will like to inhabit.

One of the best things you can do is cover any unused drains. If you know that you’re not going to use the drain in a while, then covering it is one of the best ways to make sure that drain worms won’t end up inhabiting it.

And covering your drains doesn’t have to be hard. In fact, you can buy a drain stopper off Amazon for extremely cheap.

Crevices are one of the prime locations for drain worms to breed and lay eggs. So if you notice crevices, you’ll need to seal them as soon as possible. Doing this ensures that you’re going to drastically reduce the chance of finding drain worms in your shower.

How Do You Get Rid Of Drain Worms In Your Shower?

However, the only issue with boiling water is that it may not destroy all the organic waste buildup in your drain. So if you don’t get rid of that as well, it’s only a matter of time before drain worms and drain flies come back.

Salt is another great choice, especially if you don’t use your shower too much. Not only will pouring salt down the drain kill any worms, but it will also stick to any surface of the drain as well. This will help kill any eggs that are present, as well as deter drain flies from breeding more.

If you want to use salt, make sure you’re adding more salt every time you use the drain; otherwise, it will be washed away.

Combining vinegar and baking soda is another great way to clean your shower drain and also remove any drain worms and eggs that may be living down there. And the best part is these are ingredients almost everyone has in their homes!

If you plan on using vinegar and baking soda, then all you’ll need to do is pour a cup of baking soda down your drain. Once you’ve done this, just follow it up with a cup of vinegar as well. When you do this, the two combined will begin to bubble up and kill any drain worms, help remove any debris in your drain, and remove eggs as well!

Just make sure if you’re going to use vinegar and baking soda, you leave it overnight to work its magic. Then in the morning, to clear it out, pour boiling water down the drain.

At some point in time, you’ve probably had to use Drano in your home to remove a blockage. Because of this, you probably have a good idea of how powerful the stuff is. And that’s because one of the main ingredients in Drano is lye.

So if you want the drain worms gone fast, pouring Drano down the drain is a great way to get rid of them. However, you should be warned that Drano can only be left in your pipes for around 15-30 minutes. Anything longer than that, and the pipes could end up being damaged.

Hydrogen peroxide is another great choice for killing drain worms, especially ones that are living down your drain. In fact, the moment any drain worm comes into contact with hydrogen peroxide, it’s going to kill them instantly.

And the best part is that hydrogen peroxide is also great for removing any buildups of detritus in your drains as well. So not only will you be eradicating drain worms from your home, but you’ll also be getting rid of their habitat as well, so drain flies won’t want to breed there!

On the subject of buildups of muck and detritus, if you start noticing drain worms in your shower, now is a good time to check for clogs in the pipes. Because clogs of human hair and soap scum, etc., are going to be the perfect breeding ground for drain flies.

So removing the clogs is also going to deter drain flies from breeding in your shower, as well as giving drain worms no place to live!

Using an enzyme cleaner is actually one of the most effective methods on this list, and the best part is that they’re not harmful to the plumbing in your home either!

If you noticed drain flies in your shower, then it’s a clear indicator that you need to fix any plumbing issues that you have.

When the plumbing issues aren’t too serious, one of the things you can try is a plumbing snake. Plumbing snakes are going to be great for dislodging drain fly larvae, as well as any of the muck that is clogging your drain, and providing them everything they need to breed!

To use a drain snake, you just have to insert it into the drain and then slowly move it around, knocking loose the larvae and dirt.

Once you’ve done this for a good amount of time, you’ll just need to flush the drain with hot water after.

If you don’t have a plumbing snake, you can also try a metal pipe brush as well. Metal pipe brushes are used in much the same way. You just need to move it up and down adequately before flushing the pipe with hot water again!

If you do find leaking pipes, make sure to fix them as soon as possible and remove the water that may have leaked out.

What Are Drain Worms?

Drain worms are the larvae of drain flies. They stay in their larval stage for 8-24 days before they enter a pupal stage, before finally becoming adults.

Fortunately, drain worms and drain flies aren’t capable of laying eggs in people, and they would be unable to eat any part of your body.

Drain worms don’t bite. In fact, when they’re in your house, they’re pretty much harmless. Even drain flies are harmless as well.

Are Drain Worms The Sign Of Underlying Plumbing Issues?

If you have drain worms, it doesn’t mean that you have a plumbing issue for sure; however, it isn’t necessarily an indicator. If you do notice drain worms, though, it can be a good idea to check your plumbing just to be safe.

As you can see, drain worms are completely harmless, so if you see them in your home, you shouldn’t worry. Just do everything you can to get rid of them!

If you liked this article, make sure you check out the rest of your website! Otherwise, have a great day!