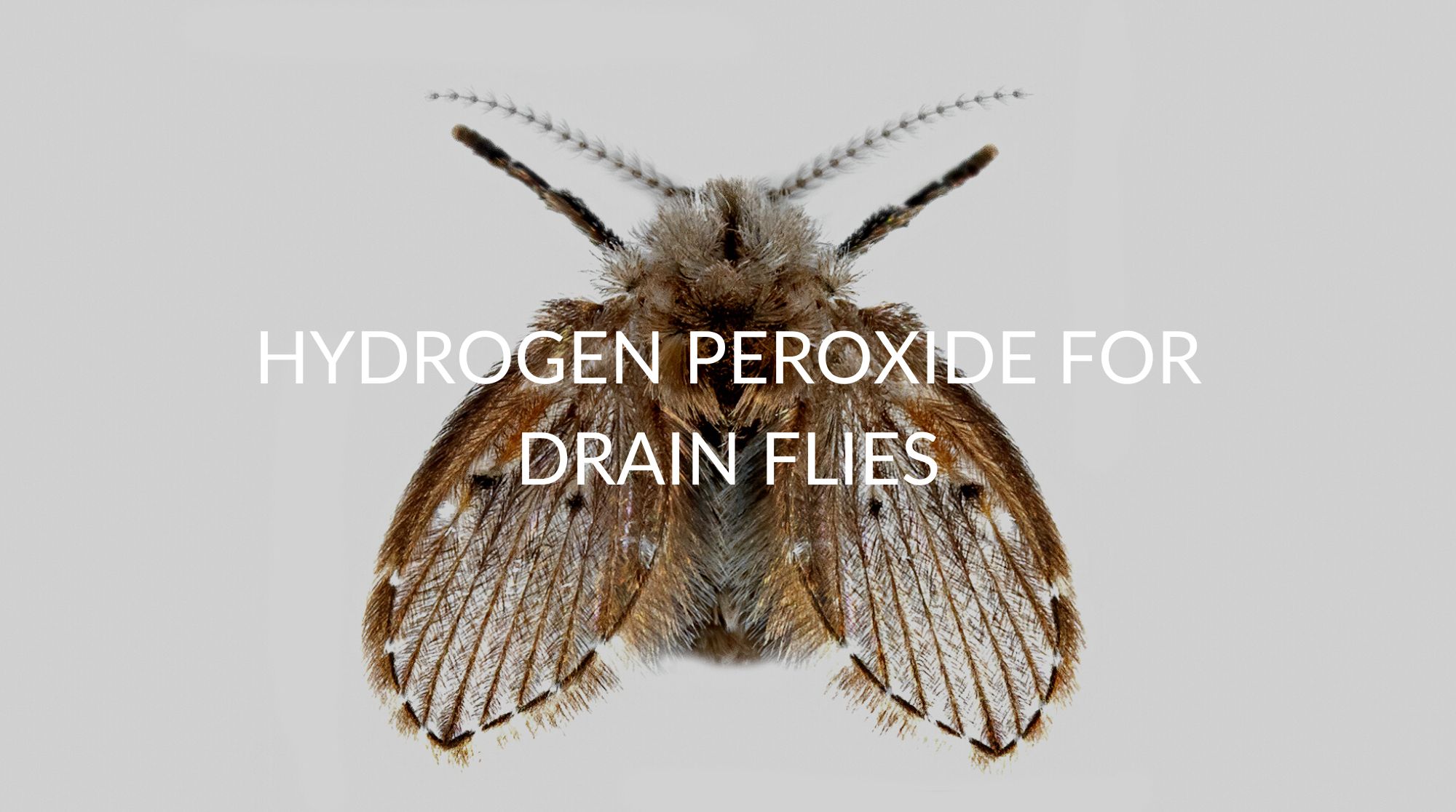 Does Hydrogen Peroxide Get Rid Of Drain Flies?

If you want to get rid of drain flies, then hydrogen peroxide is a great choice. Not only will it kill the drain flies themselves, but it will also remove drain fly larvae, their eggs, as well as any build-up of grime and bacteria that may be occurring where the drain flies live.

All of this combined means it’s a great choice for drain fly removal.

Hydrogen peroxide will kill any drain flies on contact. So just pouring it down the drain is all you’ll need to do to remove them. Once poured, you’ll notice it may begin to fizz; however, as it begins to break down, it will just turn into oxygen and water molecules.

How To Use Hydrogen Peroxide To Kill Drain Flies

Fortunately, if you want to get rid of drain flies with hydrogen peroxide, it couldn’t be simpler! You’ll just need to do the following:

Also, if you think there’s a lot of debris down the drain, it’s also a good idea to pour half a cup of baking soda down before the hydrogen peroxide to help unclog as much as possible.

Other Methods For Killing Drain Flies

You may be wondering if hydrogen peroxide is the only way to kill drain flies, and you’ll be pleased to know that there actually plenty of methods to use! In fact, there are even some more effective than hydrogen peroxide.

Here are some other things you can try!

Make Use Of A Pipe Brush

A pipe brush can also be used to help dislodge all of the eggs and gunk down the drains to make them unappealing to drain flies. Just make sure to properly clean the pipe brush after each use. The last thing you want is for the eggs to attach to the pipe brush and hatch elsewhere in your house.

One of the best natural ways to get rid of drain flies and ensure they don’t return is to use vinegar and baking soda.

All you have to do is pour half a cup of baking soda followed by half a cup of vinegar down your drain. The two will then react with one another, causing bubbling and fizzing to occur. This, in turn, kills any larvae and drains flies that come into contact with it.

And to guarantee that the mixture achieves what it’s supposed to, leave it overnight. Then, the next morning, pour boiling water down the drain to thoroughly clean it.

If you’re looking for something even stronger, Drano is an excellent choice. It’s one of the most effective methods for getting rid of drain flies, larvae, and eggs; however, it should be used with caution.

Lye is one of the key chemicals in Drano, so you can understand how powerful it is at entirely eradicating pests. However, because lye is so strong, it can harm older pipes as well as any pipe when left to sit for too long.

Drano should ideally be cleaned from the pipes after 15 minutes or 30 in the case of a more serious infestation.

The most efficient technique for getting rid of drain flies is to use enzyme cleaners. They’re not only powerful, but they’re also better for your home’s pipes because they won’t damage them.

When you use an enzyme cleaner where drain flies live, it eliminates their food source as well as any eggs they may have laid. The drain flies will be unable to eat or reproduce as a result and will either die or relocate.

To get rid of all the drain flies in your home, you may need to hire a professional in the most severe cases. When drain flies aren’t just in one area but all over the place, or if they keep coming back, then the problem may be too much for you to handle alone.

How To Kill Drain Flies Around Your Home?

Here are a couple of great ways to do this!

Kill Them On Sight

The first thing you should do is kill the drain flies on sight. Just hitting them and then removing them is going to be more than enough.

However, if you’re more squeamish, then the next method is a great choice!

The drain flies will then be attracted to the smell of the vinegar and crawl through the holes to get to it. And once they’re in the trap, they won’t be able to get out. Eventually, when they’re left in there for long enough, they’ll end up becoming fatigued and falling in.

How To Prevent Drain Flies In Your Home?

If you want to prevent drain flies from entering your home, then you should try to make it as inhospitable as possible for them. To do this, you should clean your house and pipes frequently and make sure there are no areas where standing water is left to stand in damp places.

You should also check frequently around your home to make sure everything is working in order.

Following these simple steps is often enough to keep drain flies from living with you.

Is Hydrogen Peroxide Safe For Your Drains?

Fortunately, hydrogen peroxide isn’t going to damage your drain, so you don’t need to worry about that happening like you would with more powerful cleaning agents.

Can You Mix Bleach And Hydrogen Peroxide?

You should never mix bleach and hydrogen peroxide together. When you do this, it’s going to create oxygen at an alarming rate, which can cause a reaction that is far too strong. So it’s best to be avoided.

Can You Mix Hydrogen Peroxide And Vinegar

You should also avoid combining hydrogen peroxide and vinegar, as this creates peracetic acid. This acid is toxic to humans and can also irritate your eyes, skin, and respiratory system.

As you can see, hydrogen peroxide is an effective way to remove drain flies from your home; however, it’s not the only method.

If you find hydrogen peroxide isn’t working for you, then you can also try something like Drano, enzyme cleaners, and even baking soda and vinegar!

Lastly, if you liked this article, make sure you check out the rest of the website! Otherwise, have a great day!