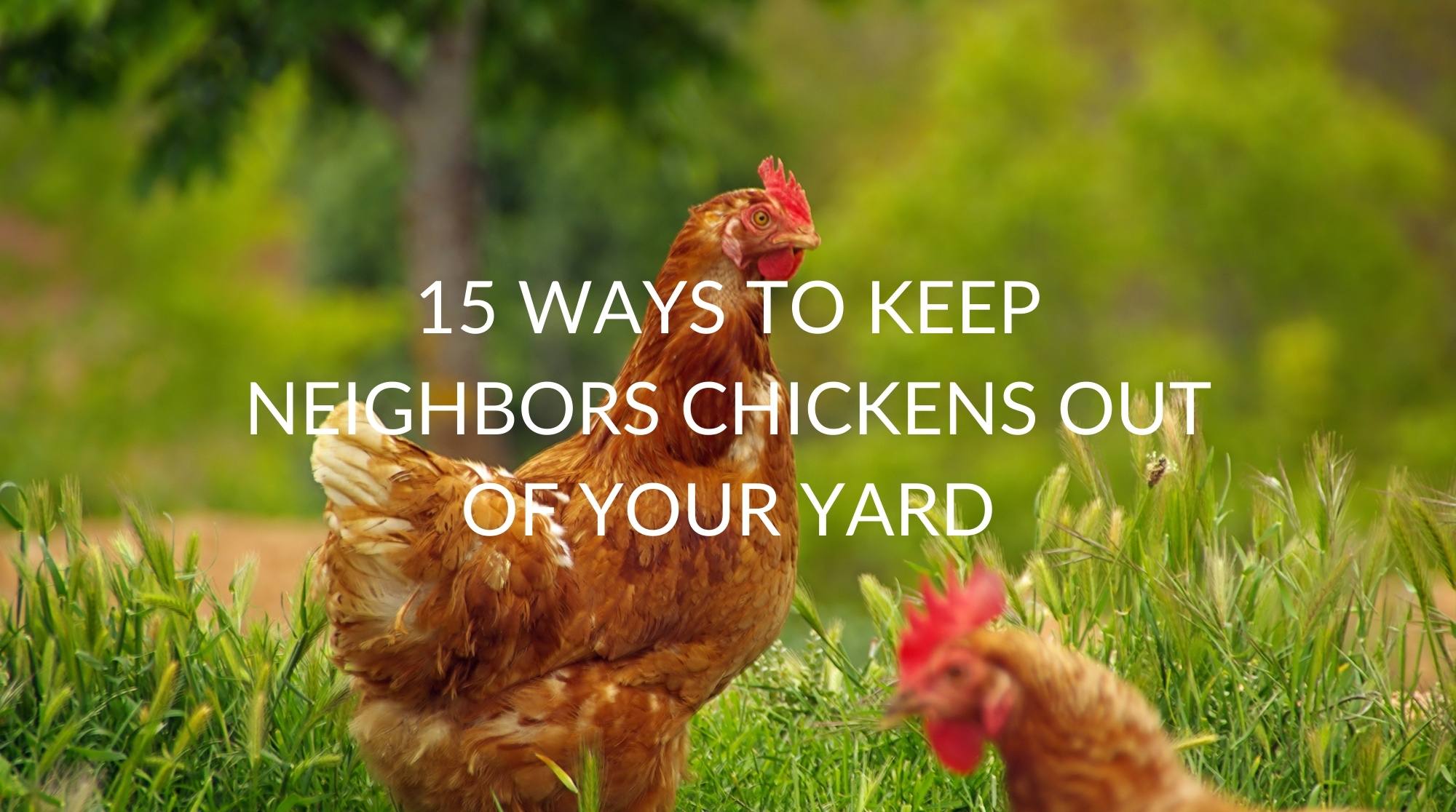 If your neighbor’s chickens keep getting into your yard, you’re going to be wondering what the best methods for getting rid of them are! After all, not only are they going to leave a mess, but they can also be exceptionally loud.

In this article, not only will you find out how to keep your neighbor’s chickens out of your yard, but you’ll also get answers to other people’s frequently asked questions as well!

How To Keep Your Neighbours Chickens Out Of Your Yard

If you’re wondering how you can keep your neighbor’s chickens out of your yard, then wonder no more! Here are all the different methods you can try!

Speak To Your Neighbour

Obviously, the easiest thing you can do is speak to your neighbor about the problem. They may not be aware that there’s even an issue, so by bringing it to their attention, they’ll be able to keep their chickens under control.

You’ll also be doing them a favor by helping keep their chickens safe as well!

Cover Your Soil With Wire Cloth

One of the reasons that chickens may be attracted to your garden in the first place is because of the soil. Not only is the soil going to be full of bugs that they can eat, but they’ll also love to take dust baths in it too!

By putting wire cloth over the soil, you’re going to restrict their access and make it unappealing to them!

Spray Them With Water

If you’re around when you notice chickens in your garden, you can also spray them with water. A hose or spray bottle is more than enough to do this! Just make sure that the stream you’re using isn’t too powerful, as it may end up hurting the chicken!

Put Up A Fence

You can also try putting up a fence to stop chickens from getting in as well! This can often be a cheap, effective method, especially if you decide to use netting or chicken wire instead of wood.

If you’re going to install a fence, make sure that too high for chickens to jump over. Generally, any fence around 4-6 feet will be tall enough to do this.

Chickens don’t like water, so one way you can keep them from your porch or deck is to place motion-activated sprinklers near them. This way, every time your chickens get close, they’ll end up being sprayed.

You should put them near your porch or in the path of your chickens to deter them. Just be warned, though, that motion-activated sprinklers are going to activate for any movement, including you!

Chickens have a lot of predators, so one way you can keep them off your porch or deck is by scaring them with some. Fake owls are one of the best choices you can use for this.

However, you should be warned that chickens aren’t stupid, and they’ll become aware that the fake owl isn’t a threat quite quickly. Because of this, it can be worth buying a mechanical one to constantly keep them scared.

It’s not hard to startle a chicken, and one of the easiest ways to do so is with loud noises. Every time you see chickens on your property, try clapping your hands, banging pots, and even using an air horn to scare them off your property.

The chances are that chickens are coming into your garden because there is food of some sort for them to eat. If you’ve got a bird feeder in your garden, then this could be what’s attracting chickens to your home. So try hanging high enough that there’s no way chickens can get to it.

Cover The Ground In Stones

One of the reasons that chickens are attracted to your yard is because of the soil in it. One easy way to deal with this is to cover the ground with stones. This is going to be uncomfortable for their feet and make your yard a lot more unappealing to them.

Scarecrows aren’t just for farmers. If you want another effective way to scare chickens, then scarecrows can be a great choice. However, depending on the intelligence of the chickens, this may only be a temporary solution. Once they become used to the scarecrow, they may begin to ignore it.

Grow Plants Around Your Porch Or Deck

There are also a whole bunch of different plants that can deter chickens as well! Herbs are the most effective for this as they’re normally a lot stronger smelling. If you’re not sure which herbs to plant, some great choices are:

Citrus is enough to smell that will deter chickens from your yard as well. However, just like with herbs, you’ll need to sprinkle citrus around your property frequently to keep the chickens out.

It’s best to cut the fruits in half for maximum effect. Not only will it give off the potent smell, but if any chicken decides they want to eat it, it’s going to taste extremely unpleasant to them as well!

You can also spray lemon juice and lime juice on the grounds of your garden as well, to make the smell even more potent.

If you’ve been thinking about getting a cat or dog, now could be the perfect time to do so. While cats are a lot harder to control, you can train the right dog to keep chickens off your property without hurting them.

English sheepdogs are some of the best for this; however, there are all kinds of dogs you can use!

Use Spices To Deter Them

You can also use spices to deter your chickens as well. Some scents chickens absolutely hate include:

Not only will the smell of these spices deter chickens, but if they walk over them, they’ll also cause them discomfort as well. However, the one downside of using spices and herbs is that they’ll have to be reapplied frequently.

You can also try planting spikey plants in your garden to keep the chickens out as well. Blackberry bushes, kei apple, holly, and even rose bushes can all be an effective way to keep chickens out of your yard, thanks to their sharp thorns!

While there are plenty of things you can do to keep chickens out of your yard, there are some things you’ll definitely want to avoid doing as well! Make sure you avoid the following:

Mothballs are extremely harmful not just to the chickens but also to the environment, other animals, and even your pets and children. Because they’re so toxic, you should only use them in the exact manner they’re purchased for.

In fact, in a lot of places, it’s illegal to use mothballs in any way other than their recommended use.

You may also think it’s okay to use rodenticides, but these too should be avoided. A lot of the time, they won’t kill the chicken but just make them incredibly sick.

Some people also recommend using cedar shavings, but these are best avoided as well. Cedar shavings are harmful to a chicken’s respiratory system. And if they have prolonged exposure to them, they can cause permanent damage that can even become fatal.

Here are some frequently asked questions people have about keeping their neighbor’s chickens out of their yard!

Can You Shoot Your Neighbours Chickens?

No, you cannot shoot your neighbor’s chickens. Not only is it an extreme way to get rid of them, but it’s also illegal in most places.

Can You Complain About Your Neighbours Chickens?

You can file a complaint with the local authorities if the chickens are being a disruption. In fact, having this complaint on file is going to be beneficial to you in the future as well.

Can You Stop Your Neighbour from Keeping Chickens?

With enough complaints, it’s possible that your neighbor may lose the rights to their chickens. If you want to take this route, make sure you’re gathering plenty of evidence beforehand!

Will A Fake Owl Keep Chickens Away?

Fake owls will only keep chickens away until they become used to them. For better results, you should use a fake mechanical owl, which will be perceived as much more of a threat to chickens.

As you can see, there are so many things you can do to keep your neighbor’s chickens out of your yard! If you liked this article, make sure you check out the rest of the website! Otherwise, have a great day!