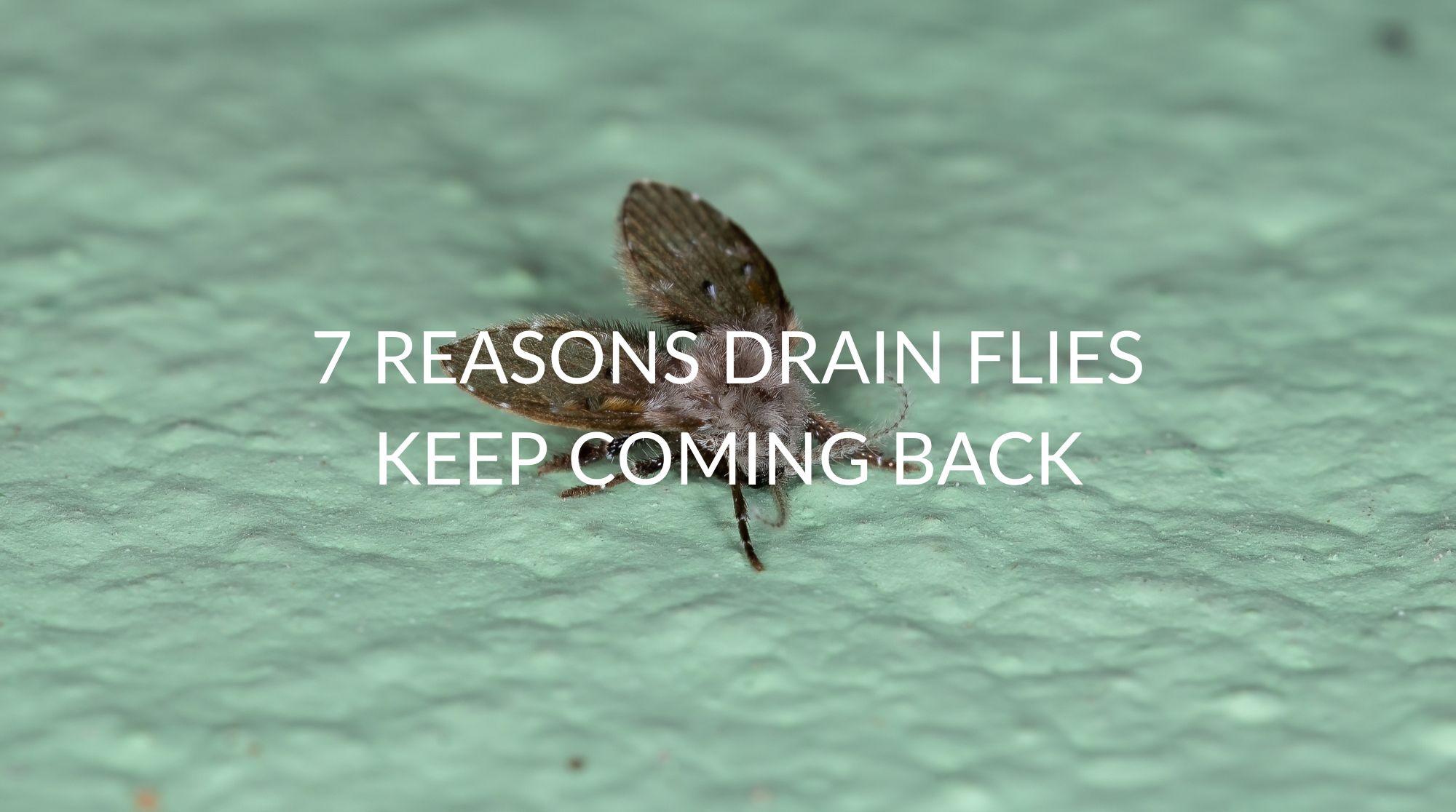 Nothing is more frustrating than when you think you’ve finally got rid of drain flies, only for them to return a few weeks later. In this article, not only will you find out why drain flies keep coming back, but also what to do to make sure they’re gone for good.

Why Do Drain Flies Keep Coming Back?

If your home is being infested with drain flies again and again, here are the main things that could be causing it!

No matter how well you’re cleaning, you have to be extra vigilant when trying to remove drain flies completely. Their larvae are incredibly tough, and if you’re not making your home completely inhospitable to them, then it’s entirely impossible that they’re going to return again and again.

The best way to remove them is with an enzyme cleaner. Not only do enzyme cleaners kill the drain flies, their larvae, and eggs, but they’re also going to unclog your drains and remove all the grime as well!

So if you’re not using an enzyme cleaner, make sure you start as soon as possible.

Some Eggs Or Larvae May Have Survived

As previously mentioned, another reason that drain flies may be returning is that some of their eggs or larvae survived.

Again the best way to make sure you’re removing them completely is with an enzyme cleaner. When cases are more severe, though, you can also use a more potent agent as well. Insect growth regulators are the next go-to as they completely stop larvae from growing into adults.

Or, if you want to try a more natural method, you can also pour half a cup of baking soda down your drain, followed by half a cup of vinegar. Then put the plug on the drain and leave it overnight. Then in the morning, pour boiling hot water down the drain to flush out the rest of the larvae and eggs.

They Live In Another Area

Another reason that drain flies might be returning is that they’re living and breeding in more than one location. Drain flies migrate a lot to any area that is damp, moist, warm, and with an abundance of food. So there are so many different locations you might find them in an around your house.

So as well as checking the drain you first found them from, you should also check:

Remember, there may be locations in your house that aren’t listed here, so it’s best to check these too.

Once you’ve gotten rid of drain flies, it can be all too easy to relax with your cleaning schedule; however, this can be a recipe for disaster. After a few weeks, you’ll be right back to square one.

So make sure you keep on top of any areas you know drain flies keep returning. If you notice that pools of standing water occur in your home, remove them as quickly as possible. As well as that, if you have any standing water in rain barrels etc., make sure they’re well covered to prevent drain flies from entering them.

You definitely need to pay close attention to preventing drain flies from coming back in the first couple of months; however, after that, you can relax a bit more again.

They’re Getting In From Outside

As we’ve mentioned previously, sometimes the source of drain flies is actually from outside your home, not from inside it. So no matter how many times you remove them indoors, they’re just going to keep coming back.

Poor ventilation in some rooms can also be one of the reasons that drain flies keep coming back again and again. Moist, warm environments are perfect for drain flies when they want to breed.

So if the ventilation in your shower/bathroom/kitchen isn’t good enough, drain flies are going to be attracted to it again and again.

You’re Not Dealing With Drain Flies

How To Get Rid Of Drain Flies

If drain flies are back again, then here are the main things you can do to get rid of them once again. And once you’ve got rid of them, make sure you follow the advice above to make sure that they don’t come back.

The simplest way to get rid of drain flies is to hit them with a fly swatter. Drain flies are so slow, so you won’t have to worry about missing them. Simple and effective. While it’s great for getting killing drain flies you can see, for the drain flies and larvae hiding in other areas, you’ll need to use other methods.

You can also try pouring boiling water down any drains that you suspect house drain flies and their larvae. Not only will the boiling water kill the bugs themselves, but it will also ruin a lot of the food the drain flies have been feeding on.

So try pouring boiling water down your drains a couple of times a day for a week, and see if there’s an improvement in the situation.

One of the most popular and effective ways to get rid of drain flies naturally is with baking soda and vinegar.

When this happens, you should place a stopper on the top of the drain to force the mixture further down instead of out of the plughole.

Now that you’ve done this, leave the drain overnight, and then in the morning, flush it with boiling water.

While duct tape is good for noticing drain flies, it’s also good for catching them as well. So every night before bed, duct tape up any drains that are housing drain flies to easily catch any of them that are trying to fly out at night.

Use A Pipe Brush Or Drain Snake

If you want to get rid of drain flies for good, then you’re going to need to remove all the sludge and grime that is currently in your pipes. Before using a pipe brush, though, you should pour boiling water down the drain to help loosen the grime.

And after you’ve used it, make sure you’re disinfecting it thoroughly. The last thing you need to do is take a brush contaminated with drain flies and move it to another area of your home.

And if you’re cleaning a sink, make sure you’re also removing the U trap and cleaning out the additional build-up you find there as well.

One of the best ways to get rid of drain flies that are flying around the room is with an apple cider vinegar trap.

To make one, you should add apple cider vinegar to a container and then cover it with plastic wrap. Once you’ve done this, poke some small holes in the plastic wrap. This will allow the drain flies to enter, but they won’t be able to get out again. Once this happens, it’s only a matter of time before they end up dropping into the apple cider vinegar.

The sugar and apple cider vinegar will attract the drain flies, and once they enter the water, the dish soap will trap them.

If you’re going to make this kind of trap, make sure you place it directly near the drains the flies are coming from for the best results.

Enzyme cleaners are one of the best ways to get rid of drain flies in your pipes, and in fact, most professionals would recommend them. And not only are they going to kill the drain flies, larvae, and their eggs, but it’s also going to dissolve and remove their food source as well.

So any drain flies that happen to survive will have nowhere to go back to; instead, they’ll be forced to leave your house.

If drain flies are attracted to a stubborn clog in your drain pipe, then drain cleaners are going to be one of the best choices to use. I’d recommend Drano. One of the main ingredients in Drano is lye, so as you can imagine, it’s going to be extremely effective at eradicating drain flies.

Just make sure you check the amount of time you can leave drain cleaners in your pipes. Because if you leave them for too long, you could end up damaging the pipes in your home!

You can also try using chemical sprays and repellents around your home as well. While most of them say they’re meant to be used for fruit flies and gnats, a lot of them are also effective against drain flies as well!

Just be careful where you’re spraying them, as some of them contain caustic chemicals which could end up being harmful.

Another way to stop drain flies from multiplying is by using insect growth regulators. IGRs work by preventing drain flies eggs from hatching and drain fly larvae from maturing, and they’re extremely effective at doing so.

However, caution is needed when using IGRs as they’re extremely powerful, and you’ll need to check whether they’re safe for indoor use or not.

Now you know all the reasons the drain flies may have entered your house again, and more importantly, what to do to get rid of them. Remember, even if you’ve successfully rid yourself of drain flies, you need to make sure that you’re being vigilant in keeping them away as well!

If you liked this article, make sure you check out the rest of your website! Otherwise, have a great day!