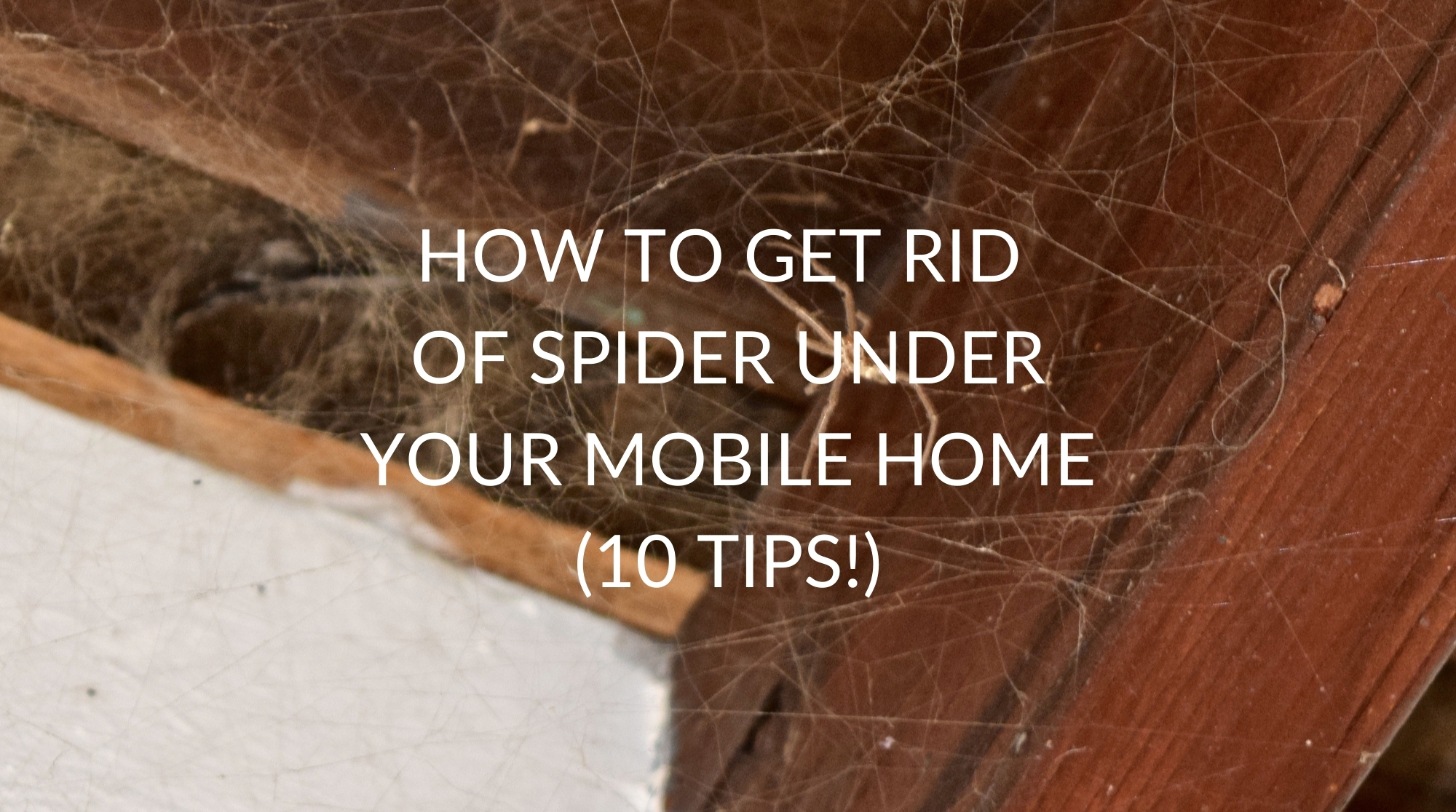 While having spiders lingering underneath your mobile home isn’t an inherently bad thing, for many, it is a big ‘no.’ Spiders can be somewhat scary and, if you let too many of them hang around, they are eventually going to get into your mobile home, and that isn’t a fun experience in the slightest.

As a result, we figured that we would put in the time to produce a guide on how to get rid of spiders under your mobile home. Well, at least most of them. You probably won’t be able to get rid of all of them, but enough to ensure that it isn’t going to be that much of a problem.

Why Are There Spiders Under Your Mobile Home?

As a living creature, spiders have three basic needs:

Underneath your mobile home is going to be a brilliant place for them to fulfill all of their basic needs.

Obviously, they are going to be close to you. This means that you may be dropping small crumbs of food every so often. While it is not going to be a spider’s preferred meal, it will certainly satisfy them in a pinch. Underneath a mobile home will almost certainly be a breeding ground for the smaller insects that spiders do find delicious too.

Dew will often collect under mobile homes, and this means that they have something to drink. There may be other sources of water down there too.

The shelter one should be pretty self-explanatory. The main predator for a spider is always going to be birds. The chances of a bird being able to pick them up when they are under your mobile home is pretty much zero.

Of course, once spiders find that their basic needs are being met in a location, they are going to start breeding like crazy. It won’t be long before there is a ton of them just hanging around. This means that you need to deal with the problem pretty quickly or it will get out of hand. 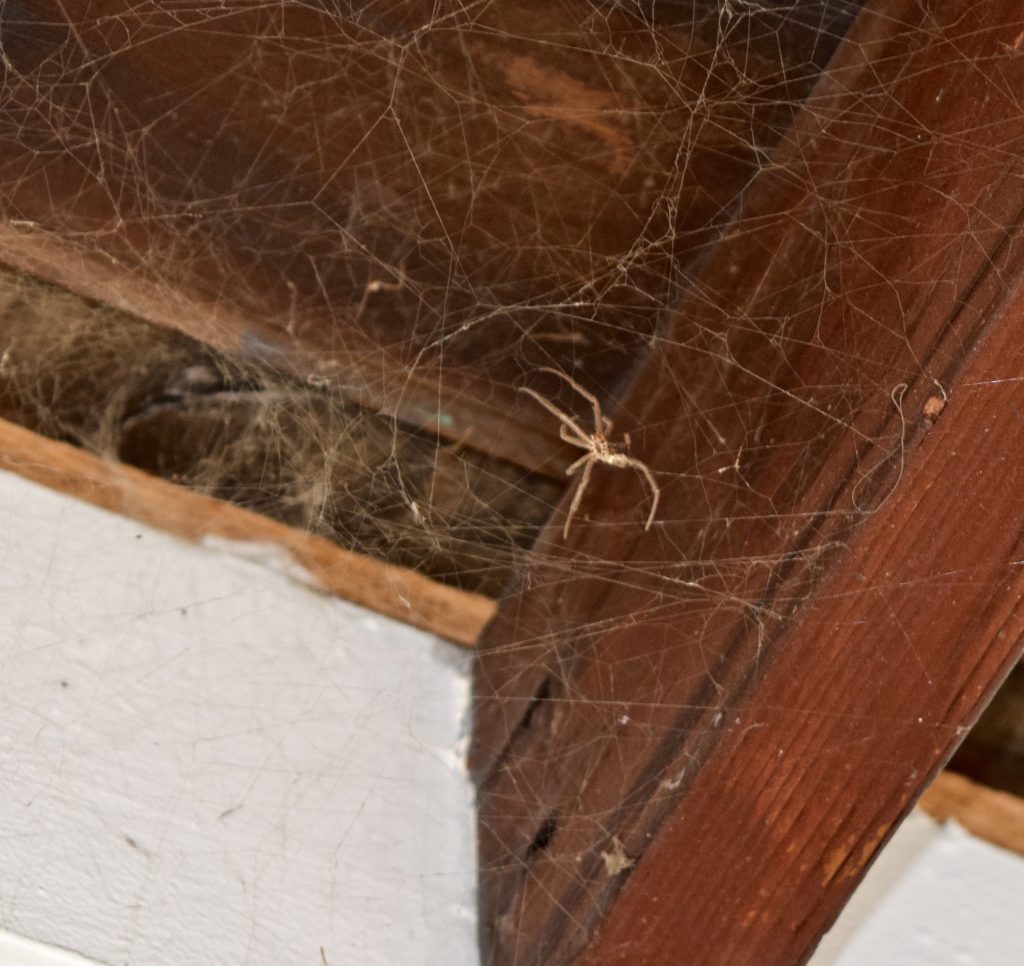 How Can You Get Rid of Spiders Under Your Mobile Home?

Do bear in mind that we are talking about how to stop spiders from getting under your mobile home here. So, we are not talking about providing tips on eradicating spiders once they have managed to break into your home. You will probably need to do a few different things for that.

Spray Salt Onto Them

You could spend a lot of cash on spider poison. However, spider poison is expensive, and you probably have something much more effective in your pantry. That is good old table salt.

Mix some salt up into a spray bottle with some water. You can then spray the spiders with salt. It will end up killing them.

Some people have also had a bit of success spraying the underside of their mobile home with the same salt solution. It does stop the spiders from getting close to the mobile home. However, do bear in mind that while salt is dangerous to spiders, it is also dangerous to plants. If it drips down onto the soil, it could kill the grass.

We know that not everybody is going to be a fan of this. However, the quickest way to get rid of spiders, particularly if you have only a few of them, is to just pick them up and remove them.

In the spider’s mind, you are a predator. This means that the location under your mobile home is now going to be seen as an unsafe place for them. The result? They aren’t going to bother returning. They feel like it is going to get them killed!

Make Up a Peppermint Oil Solution

Spiders hate the smell of peppermint. So, mix a few drops of peppermint oil into some water and spray it around the underside of your mobile home. Chances are that all of those pesky spiders will be driven out by the smell. You also have the side benefit of other spiders being deterred from getting close to your mobile home!

You can also do the same with oil made up of any of the following:

We know that there will be some people who say, “why insect repellent? Spiders are arachnids”. It is true. They are. However, insect repellent is also going to do a brilliant job at driving spiders out from their hiding locations. Spray it on the spider and it will either kill them or make them run away.

Let Your Cat or Dog Hang Around Outside

While most of us probably wouldn’t enjoy tucking into a spider, both cats and dogs do. If they see one scurrying about, then they will probably eat it. The thought of it is probably disgusting to you, but if you have a cat or a dog hanging around outside of your mobile home, you will almost certainly end up with fewer spiders.

How Can You Prevent Spiders Under Your Mobile Home?

As with all things, it is probably better to stop the spiders from getting underneath your mobile home in the first place. We have already given you a couple of solutions that could work, e.g., spraying salt and peppermint around the area. However, there are a couple of extra tips that we can share with you.

We are going to start with a somewhat weird one.

Spiders are not fans of chestnuts. We aren’t sure why, but they are. Many people have discovered that by sprinkling chestnuts around the outside of their mobile home, they are able to keep the spiders away from the mobile home. In fact, you will actually be surprised at just how effective this method can be when you use it.

If you have spiders inside of your mobile home, the chestnut trick will also work. It will drive the spiders outside of the home.

Put Up A Barrier

If the spiders seem to become a real problem, then you may want to consider putting up a barrier under your mobile home. A well-fitting piece of wood should do the trick here.

Now, some spiders may end up sneaking through the cracks. However, most probably won’t bother. They may even explore a little bit and leave.

This is something that is probably going to be working best for you if the mobile home is going to be stationary for long periods of time; otherwise, it is just going to be a hassle having to remove that barrier all the time.

Clean Up Food Around Your Mobile Home

If you clean up any food lingering around the outside of your mobile home and tie up those trash bags properly, then chances are that most of the spiders will be kept away from the mobile home. There will appear to be nothing else for them there.

There are spider repellents on the market that will deter spiders from getting near your property. You will want to look for spider repellents that have been made from chestnut extract. It is completely safe to spray on the grass under your mobile home, and spiders won’t go near it.

Get a Cat or Dog

As we said before, cats and dogs will eat the spiders. However, they will also stop the spiders from getting near the mobile home, to begin with. After all, a spider is not going to be running around in front of something that it deems to be a predator. It will take one look at the cat or dog and decide that it is an unsafe location and will move away pretty sharpish.

There are other tips and tricks that you can use, such as spraying garlic spray around the area or using turmeric powder. However, these are going to result in there being a rather awful smell outside of the mobile home, and we doubt that they are going to be that effective when used outside. Preventing the spiders from getting into your mobile home is different, but our goal here was to talk only about stopping them from hanging around underneath your mobile home.

While you won’t be able to prevent all spiders from getting under your mobile home, there are a few things that you can do to keep the majority of them at bay. A lot of this will involve the use of chestnuts, whether you are scattering whole chestnuts around the area or using a chestnut-based spider repellent. If you do spot any spiders, then make sure that you clean them out quickly to give them the message that they do not belong there. Chances are that the spider will never return once you do this.